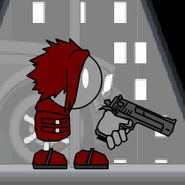 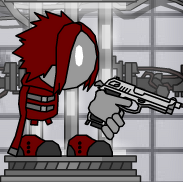 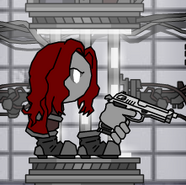 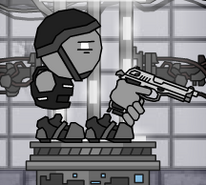 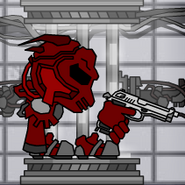 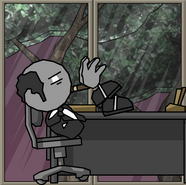 Thing-Thing follows Gamma-Class Bio-Weapon Project #154, as he awakens in a containment cell. He escapes from the cell by killing his doctor, who formerly monitored his state, taking his pistol, shooting the ceiling's vent off and climbing out. He then fights his way upwards through the building, killing all personnel.

When he arrives the third floor, he encounters and is halted by Poseidon, an Alpha-Class Bio-Android and one of the three elite bio-weapons created by the facility. 154 defeats Poseidon and makes his exit into the open world. During his escape, he learnt the identity of the faction that held him – Systems Corp. – and that the two remaining elite bio-android and bio-weapon, Zeus and Hades, were deployed to terminate him. Hades's deployment may have been retconned by the fact he was locked in a containment chamber in Thing-Thing 4.

Thing-Thing 2 begins with 154 wandering in a city. Here he encounters Systems Corp. mercenaries whose intention is his elimination; despite seemingly having the entire place against him he manages to flee into a desert. The desert's ancient structures are inhabited by undead – creatures who are later inferred to be individuals reanimated as a part of Systems Corp.'s experiments. Battling his way back into an industrial sector, 154 is caught by Zeus, who attempts to snipe him back and forth, though he is agile and dodges every bullet, eventually defeating him.

In Thing-Thing 3, 154 appears to be in a self-imposed exile. He receives an anonymous communication from someone who is aware of his origins. Following the instructions given to him by the call, 154 fights his way through Sunset City, a housing development for Systems Corp.'s enormous amount of employees, which implies they may have monopolized the market beyond genetics research. 154 meets his contact, who is revealed to be Project 153, and tells him the true reason of the instructions was to eliminate him. 153 explains he was developed to be an omniscient mobile armor pilot with heightened senses, while 154 is a form of advanced infantryman designed to be resistant to hydrostatic shock and other abilities.

The two clash, resulting in the destruction of 153's mobile armor. He then casts 154 into a sub-zero Systems Corp. service tunnel filled with more mercenaries, who mindlessly jump into the tunnel with him. 154 survives the fall with no injuries, the floor now filled with the blood of the mercs, and manages to fight his way back to the top, only to be cornered by 153 again. 154 has now been trapped in a bio-waste disposal chamber and 153 has brought in the Hades's prototype, Vahl Dreig. Thing-Thing 3 ends with 154 defeating Vahl Dreig but still trapped in the chamber.

Thing-Thing 4 takes a much darker turn than its predecessors. The game starts to 154 telling a flash-back and explanation of earlier events, beginning with Thing-Thing 1. In this flash-back, 154's clothing is retconned to have remained unchanged until this very moment, though the player can simply wear different clothing for the flash-back and re-dress into one's preferred design. 154, after questioning why he existed, retrieved Vahl Dreig's power coret to destroy one of the reinforced steel walls of the containment chamber. He escapes into the incinerators, where he fights many trained Systems Corp. soldiers. Having resolved to take on the headmaster of the corporation, he storms the main building's offices. However, there he is confronted once again by 153, armed with a Bren-10 handgun and a small personal army. 154 escapes the building by jumping out of a window, with 153 in pursuit and in an assault helicopter. 154, after landing on and destroying a car, commandeers a nearby vehicle with a miraculously placed Heckler & Koch HK21 on the backseat and shoots out 153's fuel tank, destroying the helicopter and eliminating 153.

154 goes to the genetic research laboratory in search of Systems Corp.'s CEO. There, he learns of experimental Systems Corp weapon systems including reanimating chambers and synthetic lifeforms, as well as the previous 44 bio-weapons, who are still being created. The first 109 experiments are absent. He finds the cell he and 153 were created in, now empty and covered with warning tape. Fighting through a heavily-defended quarantine elevator, 154 finally encounters the third elite bio-weapon, Hades. Hades is a dishevelled and meek individual, capable only of weak melee attacks but with great physical endurance.

After his first defeat, Hades transforms into a large, spider-like mechanical being, armed with a slow-firing, but extremely powerful rifle. 154 eliminates Hades, taking his weapon and storming into the final room. There he discovers mulitple screen images of the CEO, who reveals that he had decided to take precautions and moved into a safer place before his arrival. The CEO explains that he had defeated an immense amount of soldiers and millions of dollars. He was the perfect weapon, but could not be controlled, so they needed to tweak his attitude; but for that they would need him, willing or not, as 154 was the sole carrier of these perfect genes. Other bio-weapons had to be thrown into the incinerator due to minor issues in their genes. The CEO then sends a seemingly infinite legion of soldiers to eliminate 154 and recover his corpse, who is apparently shot dead due to the room being filled with a gas that negates 154's regenerative abilities. The player is capable of holding out in this room for an indefinite amount of time, so, if one wishes, 154 can survive the ambush anyway.

Community content is available under CC-BY-SA unless otherwise noted.
Advertisement