Alpha-Class Bio-Android "Poseidon" was developed at Systems Corp.'s Genetics Research Builiding A, and serves as the boss in the first game, as well as being one of the three elite bio-weapons. He is also the only one of the three to not have an unlockable costume in the series.

Poseidon wears a distinctive spiky gas mask with a red line visor, with the back of his head being visible. Along with that, he also wears body armor over what appears to be torn black fabric, along with a large pair of combat boots. For his weapon, he is armed with a powerful laser rifle. As with any of Systems Corp.'s Alpha-Class experiments, he is larger than a normal-sized Thing-Thing.

Poseidon is considered the easiest boss of the series - he is VERY predictable, and his only attack is relatively weak and easy to dodge. This is an opinion even shared by 154, as in the Thing-Thing 4 intro, he merely mentions Poseidon as "just a bump in the road".

Stand in the middle of the room, jump when he charges his laser in order to make him do the "jump shot" (he does this if you jump to dodge the laser) and fire when he sits still. His dash doesn't do damage (even though his weapon is bladed) and is only used to dodge bullets. This, however, rarely works.

At the end of Thing-Thing 1, there is a part where Poseidon's body somehow appears in a city at nighttime. When you press the space button to examine the corpse, a cutscene is played in which the bio-android gets up and dives at the player character and the screen turns black. However, this does not carry over into any of the subsequent games.

In the Thing-Thing 4 opening, his blood is shown to be almost completely black, ostensibly due to his genetic enhancements.

Poseidon as he appears in the TT4 opening cutscene. 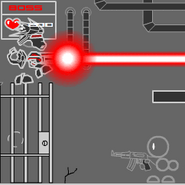 The battle against Poseidon in TT1

Community content is available under CC-BY-SA unless otherwise noted.
Advertisement